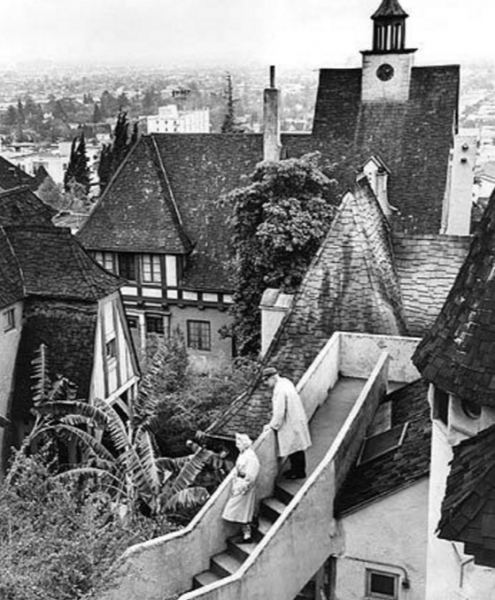 The former Garden of Allah Hotel on the Sunset Strip has been immortalized in rock songs, books, movies and even in a comic strip as the place where show business stars took up residence for extended periods. Just down the street was Normandie Village, a similar but lesser known home to many Hollywood celebrities who got their starts in early motion pictures.

This cluster of French provincial-style apartments once stood at 8474 Sunset Blvd., a vacant hillside lot today that seems a most unlikely place for the histories of movies and West Hollywood to cross paths.

Yet in its heyday, Normandie Village was a picturesque but secret playground where actors, starlets, artists and writers lived, partied and sometimes worked before and after they became big names. The Village competed in many ways with its more famous neighbor with Babylonian bashes of its own and wild nights at popular nightclubs within walking distance.

Long-term residents included the likes of Clara Bow, the first “It” girl and the movies’ first sex symbol; Billie Dove, “the American beauty;” actors Jimmy Stewart and Henry Fonda, who shared a place together; Tarzan creator Edgar Rice Burroughs, and Myrna Loy, one of only two actresses to receive an Academy Award without ever having been nominated. She reportedly called the fantasy-like setting the “make believe village.”

The Village and the Garden of Allah share somewhat parallel histories. They were built at about the same time – the Village at some point in the 1920s and the hotel in 1927. The Garden of Allah was demolished in 1959; a fire destroyed 48 of the Village’s 55 apartments in 1955, which marked the beginning of a long downturn. It hung on until finally being torn down in 1970 to make way for a retirement home.

But chateau-style architecture that was sweeping Hollywood when the Village opened for business set it apart. A New York Times travel writer, captivated by its high-peaked roofs, tall chimneys, clock tower and bamboo pools bunched along stone-covered pathways, said the place “looked like a snow globe village had been dropped onto the Sunset Strip.”

Red Hair – and Fur – for Everybody

The Village’s history and significance to West Hollywood, of course, comes from the people who lived there beginning when motion pictures were silent and moviemakers’ parties were especially loud. This much is known:

Actress Clara Bow, one of the Village’s earliest residents, landed a Hollywood contract at the age of 18. An unstoppable exhibitionist, Bow dyed her hair flame red, and was often seen driving down Sunset Boulevard in a bright red 1928 Packard with her pet chow dyed to match. Accounts differ, though, on the make of car and number of dogs riding shotgun.

“I’d whiz down Sunset Boulevard in my open Kissel … with several red chow dogs to match my hair,” Bow later recalled of her heyday in the book “The Perils of Prosperity 1914 – 1932” by William E. Leuchtenburg. In any case, there was no missing the meaning of a famous quote based on her infatuation with fast cars: “The more I know about men, the more I like cars.”

When Jimmy Stewart reached Hollywood in 1935, he shared a place at Normandie Village with Henry Fonda, his pal and fellow actor from the New York theatre.  Both were on the thin side and under pressure from their studios to gain some weight, Stewart recalled in a 1961 “Saturday Evening Post” story. This is how he describes one of the ways they tried to put on a few pounds:

“Hank Fonda was part of my weight-gaining ordeal. Hank was skinny too. Somebody told us to whip a little brandy and milk together and drink it in the morning – ‘It’ll help.’ We started with a half-and-half mixture, but as the days went by, the color of our liquid breakfasts got darker and darker. By ten a.m., we were half stoned. So we gave up the recipe.”

On the business side, Tarzan creator Edgar Rice Burroughs set up office there in 1934 where he arranged to film a movie in Guatemala. While at the Village, he also wrote “Tarzan and the Diamond of Asher,” a serial widely considered to be the forerunner of modern heroes.

Neighbors also included 140-film veteran Jean Hersholt. Richard Dix, who became a major leading man for RKO Radio Pictures, checked into Normandie Village when he first arrived in Hollywood from New York in about 1924. Then there was Joseph Schildkraut, perhaps best remembered today for playing the role of Otto Frank in both the original stage production and film version of “The Diary of Anne Frank” (1959); British humorist P.G. Wodehouse; Academy Award winner Paul Muni, and French actress Michele Morgan.

Local legend holds that the struggling Austrian actor Harald Ramond shared an apartment at Normandie Village with another man, presumably his lover, when he began dating Lupe Velez, one of the first successful Latino American actresses. She discovered she was pregnant with his child in September 1944, announced their engagement in November and then broke it off in December. A few days later, she committed suicide with an overdose of seconal.

Entertainment industry historians note that many stories about Normandie Village are particularly difficult to confirm because all the partying and cavorting took place in a remarkably unfettered atmosphere, described this way by the Los Angeles Times: “The press had not yet begun its relentless harassment of celebrities and neither they nor the general public bothered much with the goings-on at the Garden of Allah” or Nomandie Village.

But Did They Drink as Much Beer as Peyton Manning?

Former residents still recall the seemingly endless parties. “Not only was the Village the scene of Babylonian bashes, but nearby, according to unofficial history, Charlie Chaplin had a private ‘key club’ for close friends,” notes author and Hollywood historian Allan Ellenberger.

When two nightclubs opened within walking distance in the early 1940s, the neighborhood became THE place to party for Los Angeles’ beautiful people. Chorus girls from Ciro’s, where the Comedy Store stands today, were staples at Village parties no matter the occasion, and often they were the occasion, by some accounts. The Mocambo, another club close by, was said to supply its fair share of revelers as well.

No one disagreed with the perspective on those days put forward by a Los Angeles Times article that called the Village “a rambunctious rendezvous of Hollywood’s partying past.”

As the times rolled into the 1950s, the Park Sunset hotel was built next door. Many of the Village’s residents were enthralled by the hotel’s Tops Restaurant, but not because of the food. They found it remarkably easy to strike up a casual conversation with gangster Mickey Cohen, the mob boss who liked to grab a bite at the restaurant along with his bodyguard of course.

One theory behind the French provincial architecture is that for Hollywood in the 1920s, it was perfect for a town with a large population of up-and-comers craving fantasy, status and flashy elegance.

The Village’s legendary jumble of garden-type apartments resembled a French coastal town that got underway in the 1920s, although much of their early history is obscure. “One story claims that actor John Barrymore sent an architect to Europe to study French Provincial architecture and that he designed the Normandie Village’s high-peaked buildings as replicas of what he saw on his tour,” says historian Ellenberger.

Normandie Village’s architecture looked so authentic that location filming was done there for the 1938 movie “Algiers.” After World War II, scenes for movies about the French underground or spy pictures with a European locale were filmed there as well.

Two Los Angeles architects designed Normandie Village – brothers Francis Pierpoint Davis and Walter Swindell Davis. According to the Pacific Coast Architecture Database, the Davis brothers “designed this cluster of picturesque residencies modeled on types found in Normandy, France.” How they got involved with designing the apartments, though, is still a matter of speculation.